ASSIST: when one player passes the ball to another and it leads directly to a goal without the scorer having to dodge a defender.

BODY CHECK: contact with an opponent from the front or side (but not a blind side check) — between the shoulders and waist — when the opponent has the ball or is within 3 yards of a loose ball. Not permitted at 1/2 and 3/4 grade levels.

BOX: an area drawn in both ends of the field surrounding the crease area. Also called the goal area or defensive area.

BREAKOUT: when the defending team gains possession of the ball, players spread out across the field to initiate a clear.

CREASE: a circle around the goal with a radius of 9 feet into which only defensive players may enter.

DODGE: a move by the ball carrier to advance past a defender.

FACEOFF: this technique is used to put the ball in play at the start of the game, each quarter, half, or after a goal is scored.

FEED: a pass to another offensive player in an attempt to create a scoring opportunity.

FLAG/DELAYED WHISTLE: when a team in possession is fouled, a flag is thrown but no whistle will sound to stop play until the fouled team loses possession.

INTERFERENCE: a player can’t interfere with the free movement of an opponent, except when they have the ball or both are within 3 yards of a ball in flight or a loose ball.

LOOSE BALL: a ball that is not in possession of a player is referred to as a loose ball. Players will attempt to gain possession by scooping the ball off the ground. This is a technique practiced by players and involves lowering the body and hands and using the stick like a shovel to pick up the ball. The act of gaining possession of a loose ball is called a ground ball. At the U9 and U11 level players must play the ball when competing for ground balls. While incidental contact is allowed they cannot intentionally body check their opponent.

At the 5/6 and 7/8 grade levels, players may use the boxing out technique where one player uses body contact to keep his opponent away from the loose ball so that a teammate can more easily gain possession and win the ground ball. When using this technique players should communicate and say, “I’ve got man” (meaning he will check the opponent) and “I’ve got ball” (meaning he will scoop the ball). Once the ground ball is won, the player gaining possession will say release (telling his teammate possession has been gained and he can no longer legally check his opponent). Like transition, winning a ground ball can often lead to an odd-man situation and a scoring opportunity as the defense can be caught out of position when possession is gained.

MAN-DOWN: the defense plays with at least a one-man disadvantage due to teammates serving penalties.

MATCH-UP: a call given by the goalie to tell each defender to find his man and call out his number.

MIDFIELD LINE: the line across the center of the field of play. ON-THE-FLY SUB: a substitution made during play.

PICK/SCREEN: an offensive maneuver in which a stationary player attempts to block the path of a defender guarding another player.

RELEASE: the term used by a timekeeper to notify a penalized player in the box that he may re-enter the game.

SCORER’S TABLE: the table and area between the benches at midfield where time and score is kept, penalties served and some substitutions made.

SHAFT: the stick’s handle, the shaft, may be made of aluminum, wood, or composite material and is connected to the stick head.

SLIDE/HELP: when a defender leaves his defensive position to help a teammate guard an offensive player.

STICK POCKET: the strung part of the head of the stick which holds the ball. Sticks with pockets not to specification may be removed from the game and may also lead to penalties.

GLE: goal line extended - The imaginary line that extends straight out from the sides of the goal line.

SWITCH: a term used for off ball players to switch positions with their adjacent teammate in an attempt to occupy the off ball defenders during a doge from the opposite end of the set play

RE-DODGE: can be done from X or up top. A player dodges, can make a two or three step drop, then re-dodge back towards the goal.

V-CUT: offense players make this movement to get their hand free and to get open. The offense player cuts into the defending player and then into open space.

SLIDE: leaving the man you are guarding to pick up another offensive player 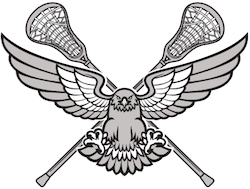